Occasionally, I come across some interesting sights on my daily walk.  If I have my phone with me, I might think to take a picture as I did earlier this spring with the poor fallen hero, unless I deem the sight too disturbing (empty rabbit skin in the gutter - how'd that happen?) or am too slow.  I wished I'd had my phone yesterday morning when I saw a deer wandering through the front yards of a nearby 40-year-old suburban neighborhood - it's not like there are any woods or open fields nearby.  I've seen a fox once or twice and heard an owl, but never a deer!  At first I thought it was a large dog but then I got a better look at its head.  We live near a narrow streamway, so I assume that's how the deer made its way into the neighborhood, but it was disconcerting watching a wild animal wandering manicured lawns with the noise of highway traffic and a train in the background.

However, some sights are too irresistible for mere photo documentation, which is how Stanley came to be.  He's comprised of objects I found on my walks over a three-day period:

Each part of Stanley is exactly as I found it.  I didn't remove the label bearing his name from anything, or bend his arms into shape.  I figured the ball would make a nice head but didn't see a face until I started trying to position his head so it wouldn't roll off his body.

Claire and Dwayne F'. are the usual found-object artists at House Full of Nerds, and I'm pleased that Stanley can join their growing collection of junk robots.
Posted by MEK at 4:27 PM 5 comments:


This year's camp saga started during our family vacation two weeks ago, when a headache kept Claire from sleeping during our last night at our favorite campground.  We blamed the high elevation and the three older Nerds divided her share of the work as we broke camp.  She seemed better after a shower, a mosquito-free dinner, and a night in a real bed and was fine during a visit to the Great Sand Dunes the next day, but said she wasn't feeling "too good" the following morning.  It wasn't until she uncharacteristically refused a slice of pie at a street market, however, that I realized how bad she felt, and she remained sick for the rest of the trip.

Five days later, when Claire was still coughing and feverish and Hannah was also developing symptoms, I called our doctor, who ordered a chest X-ray and a throat culture in spite of a full appointment schedule.  When the technician peeked at the X-ray slides, had a quick word with the doctor, and returned to inform us that a throat culture wouldn't be necessary after all, I realized what that meant and began fretting about whether either girl would be able to attend camp this year.  Claire, however, was ecstatic - a pneumonia diagnosis meant no one would be scraping the back of her throat after all!

Thanks to a few days' rest and our excellent and compassionate doctor, who prescribed a round of antibiotics for each girl, House Full of Nerds is able to bring you the following, albeit brief, documentation of the two younger members' departure for Girl Scout camp.

The Girl Scout camps in our area offer several sessions in June and July.  No matter which week the girls attend, their attendance seems to be the cue for the temperatures to hit triple digits, and this year is no exception.  The counselors are great about reminding their charges to drink plenty of water, although our family has done enough desert hiking to help the girls see the importance of staying hydrated.

One of the coolest things about my girls is that they actually enjoy each other's company.  For the past two years, they've gone to the same camp, albeit different programs.  This year the hardest part for me wasn't saying goodbye until the end of the week, it was putting them on separate buses.  However, one wants to gain canoeing experience so she can go on a 10-day canoe trip next summer - provided that program is still offered then.  The other is excited about helping to care for her camp's horses and learning to assist younger riders, so it's off to the lake for one and the stables for the other.

Thank goodness the buses for the two camps showed up at about the same time. After a few more photos (none of which included either child next to the bus, with the counselors, or boarding the bus) and several minutes of standing around, we said one last goodbye and I put them on their separate buses and then drove off.  I wasn't the only parent to leave before the buses did and I assume most of the folks who stayed behind were first-timers or maybe really fond of diesel fumes. I'm far from a first-timer - this is Hannah's sixth year at camp and Claire's fourth.  Wow.  I used to squirrel away old day camp t-shirts and too-short jeans for them to wear to camp, carefully going through the packing list myself.  This year, I helped locate a missing pocketknife, wrote out instructions for each daughter's medication for the camp nurse (the girls packed their meds themselves, including that final dose of antibiotics), and made a couple of trips to the store for mosquito netting and toiletries.  Other than that, they were on their own.  Well, okay - I did insist on their showing me that they'd packed sunscreen, too, so I guess "bad parent" doesn't apply so much as... "experienced"? "trusting"?  Yes to both of those, but mostly I'm eager for a few days alone with my spouse! 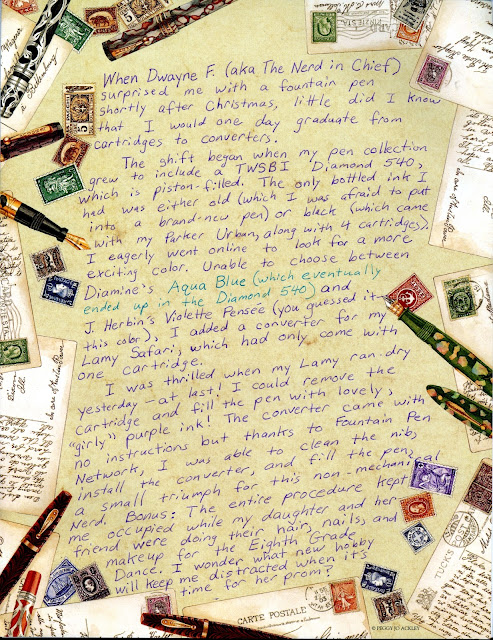 The ink color in the scan came out pretty close (Thank you, Epson!), but I think the purple looks a touch bluer than the original - or maybe it's just my laptop screen.  Or how the ink looks against the paper, which provides an excuse to continue the happy task of experimenting.

One thing I love about fountain pens is that they take up less space than typewriters, which is a good thing, considering Dwayne F.'s growing fascination with them.  And, now that I've discovered the joy of converters, I can indulge in multiple ink options with the happy abandon of an 8-year-old with a four-color ballpoint pen.

On a final note, after reading the pencast, Hannah informed me that when she goes to prom, she wants me to be her "style consultant" - heaven help us both, considering that "dressed up" for me means wearing a shirt without writing on it!  When I think about it, though, it's a pretty cool thing to hear on Mother's Day.
Posted by MEK at 6:34 PM 2 comments:

While Hannah and I are the unapologetic language nerds in the family, all four of us enjoy pointing out errors in spelling and punctuation to one another.  Even the non-human members of House Full of Nerds get in on the copy-editing act (see Vintage Technology Obsessions, Preview of Coming Attractions).  While this can be amusing, it also has its drawbacks - my laziness is only part of the reason I rely too heavily upon the computer versus the typewriter or pen.  I don't place typos in the same category as spelling errors, except of course when I make them.

I also find that there's a slippery slope from smug superiority to "what is this world coming to?" horror.  Hand-lettered signs with misused apostrophes get a snort and a "Well, clearly, they didn't have Mrs. Armstrong for third grade!"  Use the wrong "your" or "their" and I might mutter that I could have sold you the editing services of my elder child when she was in seven.  But occasionally I'll come across something of this magnitude: 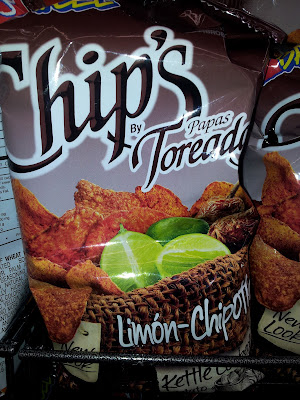 I can almost hear Mrs. Armstrong:  "What does Chip own - a 'by'?  Or do you mean Chip is?"  A hand-written sign is one thing, but a decorative apostrophe on a mass-produced product makes me wonder what else on the label is incorrect. (At least the accent over the o in limon is correctly placed.  There's a local fast-food chain whose misplaced accent has caused generations of Spanish students to call it "Taco Vee-AH'" instead of "Taco VEE-a.")  I ran across this product at a big-box store and had to take a picture for my family's amusement.  It was either that or mourn the downfall of western civilization, and I had errands to complete.

Email ThisBlogThis!Share to TwitterShare to FacebookShare to Pinterest
Labels: punctuation 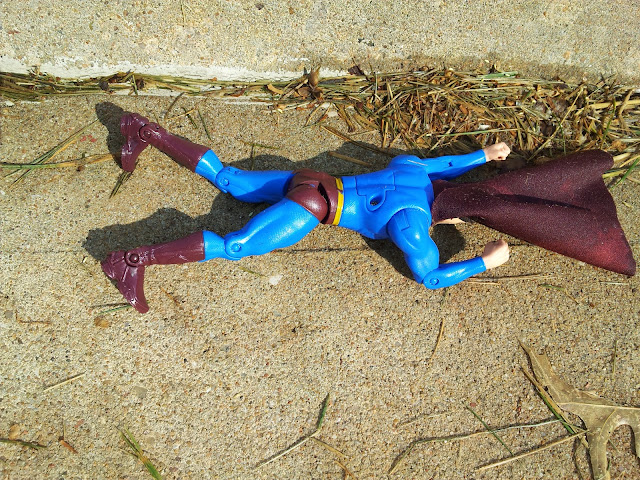 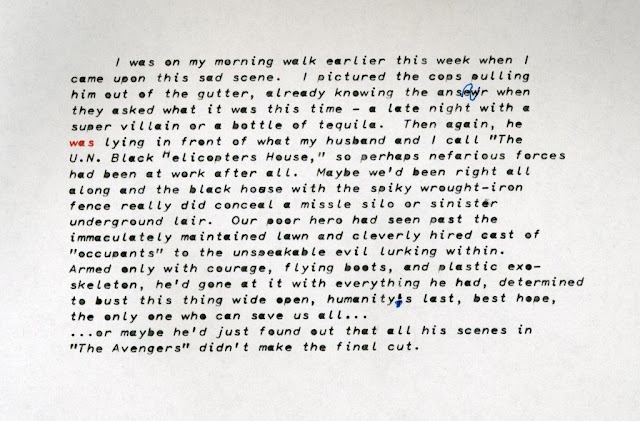 We at House Full of Nerds would like to wish Leonard Nimoy, costar of one of our favorite TV series, a very happy 81st birthday!
My Star Trek fandom originated with the short-lived Saturday morning cartoon, a gateway drug for the live-action series which by then was in syndication. When I was a kid, "Star Trek" was something cool and kind of scary that kids with older siblings and lax bedtimes watched; I had neither, so it wasn't until my teens that I began watching "Star Trek" reruns on the local unaffiliated station, at the time the only alternative to the three major networks and public television.  Several of my friends were big "Star Trek" fans, and I was quickly hooked.

Spock, of course, was my favorite character, with his tendency to raise one eyebrow and pronounce phenomena his crewmates found terrifying as "fascinating" or merely "interesting."  When the Nerd in Chief and I introduced our daughters to Star Trek, they quickly became fans of the half-Vulcan, half-human, especially enjoying his verbal sparring with the chief medical officer.  Watching "Star Trek" episodes on DVD remains a favorite House Full of Nerds activity.

So, happy birthday, Leonard Nimoy!  Live long and prosper! (To which I'm sure Mr. Nimoy would reply, "Gee, I never heard that one before!")