When the Nerd in Chief brought home these bottles of ink last fall, I thought they were beautiful and couldn't believe they'd only cost him a dollar apiece.
If I felt sorry that no one at House Full of Nerds was likely to use the contents, it was a fleeting thought.   The bottles were the subject of a Vintage Technology Obsessions post, I admired Dwayne's photos of them, and then promptly forgot about them until a week or so after Christmas, when Dwayne asked if I'd like to try writing with something other than the Higgins sepia I'd purchased for one of my Christmas presents to him.  I wrote first with the blue and then the purple; the colors are just a tad more vivid in person than in this scan:
The ink itself has what I would call a nice chemical smell; a little bit sweet and not at all offensive to my tastes (of course, I did spend too many hours assembling and painting model airplanes as an adolescent). As a novice dip pen-writer, I much preferred Quink over the water-based Higgins.  Even when I forgot to tap off the excess ink after reloading (seen in the transition to purple), the Quink was fairly forgiving.  I set out to write in Spencerian business script but found it hard to concentrate on letter formation, dip pen use, and ideas, so the first two Qs and the H in Higgins are the way I learned to make them in 1973. 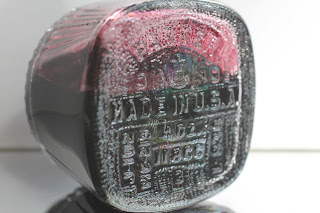 I cleaned the nib immediately after use, but the next time I wrote with it (also with the Quink - a Spencerian sample for my daughter's Social Studies class), it seemed scratchier than usual.  I'm not sure whether this is the result of the 60- to70-year-old ink's having damaged the cheap nib or (quite possibly) my inexpertise with a dip pen.  Either way, I won't be putting it in my fountain pen!
Posted by MEK at 8:08 PM