With school back in session for over a week now, Christmas and New Year's seem like a long time ago.  (In fact, last week I saw EASTER candy on an end-cap at a big box store.)  While the junior nerds were glad to see their friends and teachers again, our family is back to having to work hard to make sure we get enough time together.  One of of our favorite family activities is game night, and over the past year, our favorite game has been Luck of the Draw.

Since our art skills range from poor (the Nerd in Chief) to very good (the Littlest Nerd), we were pleased to discover that points are awarded in a wide range of categories, such as "Used Most Graphite," "Art Teacher's Pet," and "Don't Quit Your Day Job." Each card has three possible subjects and a player rolls a die that determines which one everyone must draw.  When one of the subject choices is especially cool, we have been known to try mind control to influence the outcome, with limited success.  The 45-second time limit helps keep things interesting.

A typical round may look like this:
The chips are used to assign each drawing a color so that voting can be done without knowing whose drawing is whose, although the concept of anonymity works best when players are unfamiliar with each other's drawing styles.  Still, even the four of us can occasionally surprise each other, as in this example, when the word was "turkey." 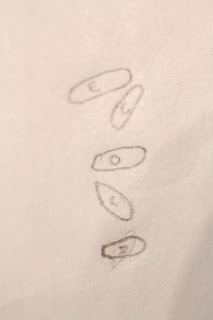 The Nerd in Chief doesn't always win categories like "Most Unsettling" - just usually.  Most of the time it's intentional on his part, but sometimes it's just the result of his lack of drawing skills:

You can see Dwayne's watermelon allergy reflected in this one:

Predictably, nerdy pop culture references sneak into many of our drawings.  I was surprised when the word "dragon" didn't elicit the same response from each of us.  I suppose I should have expected a Dungeons & Dragons reference from Dwayne and the adorable little dragon is typical of Claire's doodling.  We're all such fans of Strong Bad on homestar runner, though, that I assumed we'd all draw Trodgor.

Speaking of nerd culture, this one is my favorite.  We're all fans of "Hitchhiker's Guide to the Galaxy" (especially the BBC miniseries), but it was still eerie when each person's "whale" drawing revealed that we were all thinking the same thing: 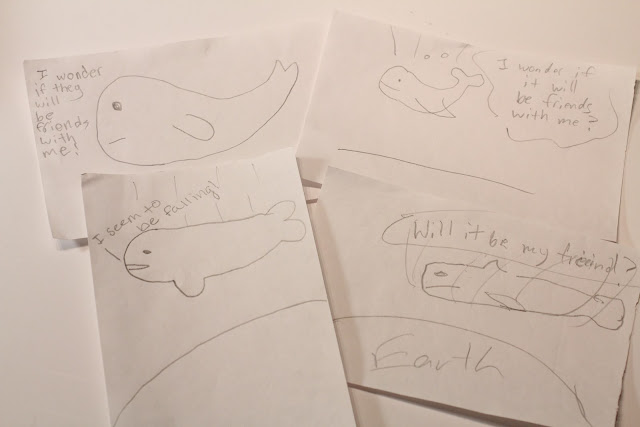 We celebrated with high-fives and Nerd Salutes all around.  A great moment of family unity!
Posted by MEK at 8:39 PM