The Coolest Thing in the World - 100 Years of Girls Scouts, Part 1

When I was in first grade in the early 1970s, I was insanely jealous of my second grade friends.  They could read better, run faster, and knew more Partridge Family songs than I.  However, my jealousy reached its peak once a week, when they wore their Brownie uniforms to school.  I thought the brown dress, orange tie, and beanie represented the height of coolness.  (In my defense, I did know enough about coolness to pick the Jackson 5 over the Osmond Brothers, at least.)

I was a Brownie and then a Junior Girl Scout for four years (funny to realize I've been a Girl Scout leader for more than twice that time).  I learned to sew and cook, but also to build a fire and identify poison ivy.  Some of my favorite memories include playing in the creek and roasting hot dogs on an overnight; weaving a belt and hiking at Day Camp; and performing at the annual Thinking Day program, in which each troop did a song or dance from a different country while dressed in the style of that country.  Of course, there were several activities in my Junior handbook we never got to do, much to my disappointment, such as... 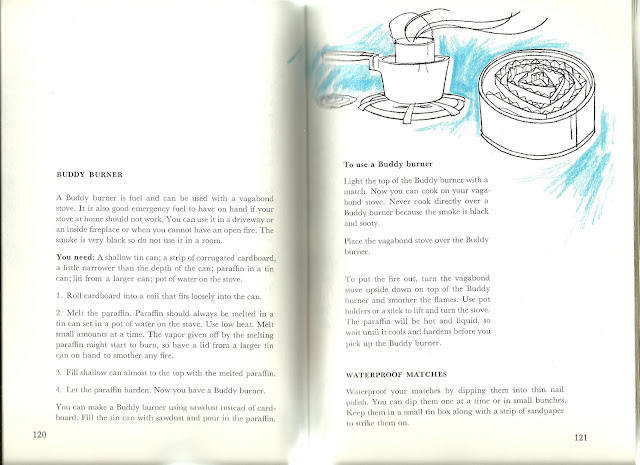 My troop never got to make Buddy Burners either, which is probably just as well.  As mentioned in the text above, these tuna can-housed cardboard-paraffin combos are best used with a vagabond stove (an inverted coffee can with vent holes punched in it).  One memorable afternoon, my neighbor and I were playing house with her older sisters.  To make our play more realistic, the middle sister got our her Buddy Burner and set it on the toy stove, which fortunately was outdoors on the patio.  I think we may have planned to boil water or something but as soon as match touched cardboard, the Buddy Burner went up like a torch.  Water wasn't enough to smother the flames, but dirt finally did the trick.  With my friend crying because her stove was ruined and her sisters arguing over how they'd explain the fat streak of black the thick smoke had left on the side of the house, I quietly slipped away.

Who knows - as soon as I got home from the Buddy Burner Incident, I may have holed up with my mom's old Girl Scout handbook.  I loved reading it as a kid (I am a nerd, after all) and was thrilled when my wonderful husband, the Nerd in Chief, brought one home from a thrift store last fall:

Unlike my handbook, my mom's was hardcover and compact.  And to a kid in the Seventies, the old-school activities - pasteurizing milk! making a lean-to! frying bacon and eggs on a rock! - were as exotic as the Jetsons' flying car and food capsules.

For some reason, the guidelines for ice safety (above) particularly fascinated me, maybe because I had only ever skated at indoor ice rinks.  All my handbook had to say on the subject was "Skate only on ice that has been tested," but both books describe how to rescue someone who has fallen through the ice, and what to do in the event that you fall through yourself.  The idea that kids would be entrusted with information that could save someone's life rather than reflexively being told to call on an adult to bail them out strongly appeals to me.  And I love that both handbooks encourage activities that seem slightly dangerous by today's standards - after all, encouraging girls to get outdoors and become self-reliant can't be accomplished without a few scrapes and bruises.

My own time in Girl Scouts ended a year after my family moved from Maryland to Kansas.  At my new school, the girls who became my best friends were in Campfire Girls, so after fifth grade I traded in my badge sash for beads.  Sewing them onto my new Campfire vest was no problem - I'd learned how in Girl Scouts.
Posted by MEK at 8:47 PM