Several weeks ago, I received three dusty boxes of ribbon and bows from my father-in-law, who was widowed for a second time last February.  Unlike my late mother-in-law, I am merely adequate when it comes to wrapping gifts - when I can't find an appropriate gift bag to re-use, I'll drag out our one roll of birthday paper (currently a unisex blue striped pattern) or choose from one of several jumbo rolls of Christmas paper we've had since our children were in preschool.  I don't mind the wrapping process and can usually get the corners nice and square, but rarely embellish beyond a hastily scrawled: "To _, From Mama and Daddy" or a bow recycled from a more conscientious wrapper - until recently, usually my mother-in-law, Vernilea.

I tell myself I'm being "green" by not bothering with ribbon, but my laziness may also have something to do with it.  So when my father-in-law offered me three boxes of ribbon and bows, I wasn't about to refuse - how much greener can you get than rescuing stuff from a landfill, or at least using it once before sending it there?  And even someone as lazy as I am can retrieve a roll of ribbon and a matching bow from the basement.

Admittedly, when Don handed over the boxes, I felt disappointed and a bit overwhelmed.  There were several little plastic spools of ribbon like you buy at Target, but mostly there were cardboard reels 8 1/2 " in diameter, each originally holding 250 yards' worth - probably enough for me to host a neighborhood Maypole dance every year until my 11-year-old graduates from high school!
Adding to my ribbon angst was the uncharacteristic dustiness of the boxes and their contents.  Vernilea and I weren't quite polar opposites when it comes to housekeeping, but she was at the far right end of the tidiness Bell curve, while I am at least one standard deviation (maybe two) left of center.  Receiving something dusty from my mother-in-law just felt wrong, so I did what I always do with items I can't immediately face - I piled two of the boxes at the far end of our dining table, set the third one under the kitchen table, and refused to make eye contact with them.

On Thursday I finally forced myself to sort through the ribbon - maybe because it seemed preferable to cleaning out the freezer.  I found a box of glittery pine cones and ornaments that cheered me right away, reminding me of Vernilea's elaborate bow arrangements on Christmas gifts.  I dusted the spools and reluctantly threw out stuff that was too faded or that I knew I'd never use, including gummed gift tags so forlorn they could only have come from a solicitation for a charitable organization.  At the bottom of one box, I found four gold gift tags that were heavy when I picked them up.  I realized they were thin metal Christmas tree ornaments like the ones my husband's parents had given him as a child - how cool that Vernilea's family had gotten the same kind!  Then I examined the first one and found my brother-in-law's name, Michael, and the date1978.  The next two were dated 1979, one for my husband and one for his brother.  The last one bore the name of my first mother-in-law, Margaret, mother to my husband and his brother Michael. 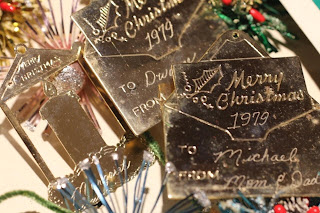 We're lucky to live in a community where both All Saints Day and Dia de los Muerto are celebrated.  Tomorrow, when we go to a Dia de los Muertos celebration at our local art museum, we'll take this photo to put on the altar in honor of both my mothers-in-law, Vernilea and Margaret.  The two of them couldn't have been more different from each other, but a love of Christmas and gift-giving was one thing they shared.

Email ThisBlogThis!Share to TwitterShare to FacebookShare to Pinterest
Labels: family